Have you ever heard that dreadlocks will easily start to get mouldy? We at DreadFactory have decided to test that rumour. Our ex team member Iris from Basel is a laboratory chemist and has done a few experiments on mould and dreads.

The rumour that dreadlocks will easily get mouldy if they’re humid for too long is probably something that most of you have heard of before. However, is it even possible for hair to go mouldy? And if so, which circumstances are needed in order to actually produce mould on locks?

Following, you will find a short over the experiments that Iris did. If you would like to read a more in-depth analysis and to see some pictures, you can download a PDF with the detailed experiment in the link below.

Mould needs a proper climate to grow: It prefers a humid climate and can grow in temperatures ranging from -10 to about 60 degrees (although it prefers temperatures between 20-25 degrees). It also needs a steady supply of nutrients in order to have optimum growing conditions. It is possible that in clean hair, this nutrient supply is missing because the cuticle layer is intact and hard to penetrate for mould.

Maybe constant humidity is able to somewhat soften the hair structure and to allow mould to access the nutrients in human hair. In this experiment, I will try to find out if mould can grow on hair without a previous long-term process of rotting.

First, a brand-new dreadlockextension is wetted and put into a glass filled with about 1cm of water. The glass will then be covered in plastic foil, every three days the foil will be removed in order to replenish the water, however without cleaning the extension in between. This way, a near-constant humidity of close to a 100% can be achieved, which can be observed on the inside of the glass and on the foil itself. Mould actually needs very low levels of oxygen so the quick removal of the foil provides adequate amounts of new oxygen.

The extension is divided into three sections and observed over 15 days. After those are over, I will take probes from each part of the lock and test them for mould under a microscope. The water is also tested, both for mould and bacteria. The probes are coloured with ink in order to achieve high contrasting, which is a standard of practice for microscopic analysis of fungi. Each probe is looked at with 100 – 1000x magnification under the microscope.

Even in these conditions mould can’t simply grow on hair. The 15 days were already quite a liberal amount of time for this experiment. My conclusion is that under normal circumstances, it’s not possible for mould to grow on hair due to lacking nutrients. If it was to do so, the hair structure would first need to be damaged on a chemical level, not on a purely mechanical one. It remains to be seen what conditions would be able to actually make dreadlocks mould. It’s quite likely that if locks do actually smell mouldy this isn’t based on the hair structure itself but instead caused by dirt like remains of food. 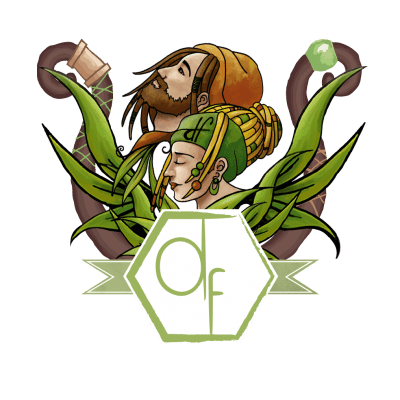